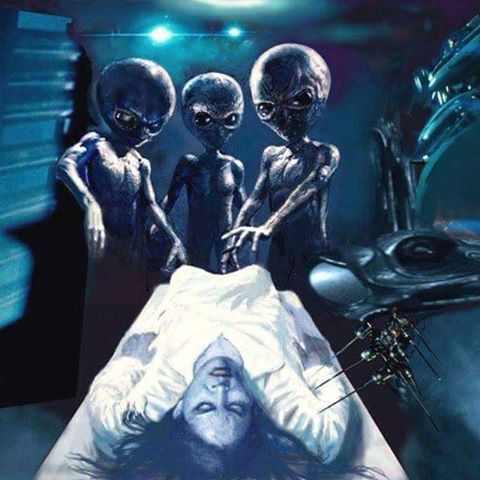 November 7th, 2016. Its 9:15 am, Im at home alone. Suddenly I feel very tired, I decided to close my eyes for a bit, as I did that I started feeling heavy sinking into my bed. Then I started seeing clear images as if I was lucid dreaming and I saw there was a man standing at my doorway. Seemed like 6 foot tall, he was wearing an army body suit of some kind, almost like a soldier. He looked very strong man although he never came close to me or even touch me just his presence in my house, a calm sense of knowing that came upon me that I will be going with that man to their ship which was right above my head. He appeared first then next a round grey ship appeared over my heard. As I am looking at this man still standing calmly without blinking an eye ( he seemed a bit cold as if he had no feelings ) he told me (telepathically) There is no need to be afraid you will have to come with me. (he acted as if this had happened before) he didnt want me feel frightened. The next thing I know I felt paralyzed everywhere but my eyes. I felt motionless, and a strong force pulled me up towards the sky. What I find strange while this was happening, I didnt once try to resist or even fight back. I was feeling happy to go. It was light and felt the force picking me up I looked at my body it felt calming and relaxing as I was going up I looked down and looked at my feet in the air. I watched my body with the knowing that the man who was there, his job was to ease the way for my abduction. As if with him presence there I was assured to be calm and understanding of what is happening. He didnt move while I was taken into the ship. Also the next thing I noticed, strange when he had said you will come with me, but he wasnt, he just stood there and watched me going up to his ship as if he was following me right away once I had made it inside safe and sound. I dont want to sound unreal there is no need to write BS, but the way he appeared before me, was more like a guide, an accompany, someone who is going to ensure everything will be well taken care of. That feeling of been picked up lasted a few seconds like I said I could see the ship specially a beam of light over my body, as if the light was doing the suction. Once I was high enough almost inside I dont remember what happened. 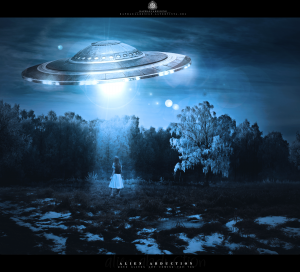 Next I remember someone telling me all so softly: ” you need to get up now, its time for you to leave but you will be back” As I heard those words while getting up on a bed with light in my face, I snapped right back at him, I remember saying: what? I am not going back. I dont want to I only got here now why do I have to leave all so fast? ” I demanded answers. Again he kept his calm he said: “You need to go visit your parents, they are missing you.” I remember I was laying down cause I recall clearly seeing the light again while getting up on some sort of bed arguing back over and over that I didnt want to go back. The thing I didnt know there is no negotiating with aliens. I was accompanied back with an alien who came with me to my parents house to drop me off. Its like I could see he was there but no one could see him. So I was finally dropped off back on earth at my parents house. As I arrived through the doors while everyone was seated down at a table, I got close, now im sitting between my mom and dad.. I was shocked to find everyone at the table has gained 20 to 30 more years. I recall looking so shocked there were no words coming out of my mouth, I looked over my family and specially my dad who was so old and grey, he was like 80 years old, I asked: how long was I gone? My dad said: we were afraid we were never going to see you again. So happy to have you back home. While these words went over in my mind over and over I remember looking at myself and not having aged, not even a day. To this day it remains unanswered what kind project was I on? What was the details of my mission with ET beings? Not only I had not aged in fact for some reasons I was looking younger as if I had either gone back in time or I was somewhere where time didnt exist. I look around the table, I see everyone is happy talking eating, for some reason I could read their thoughts. I looked around and I could see him the ET being who has been with me all along, but no one noticed him cause no one could see him except me. As he sees me so shocked he tells me telepathically to go on enjoy my time he is just watching over me not to fell fear, to act as if he is not there. As Im still sitting at the table with my whole family around me happy to see me, there is just one thought on my mind what happened to me?

I wake up, now its 12:15 pm exactly 3 hours later, completely drained, I felt I couldn’t even walk towards the kitchen before I fait, I felt so weak I cant describe that day the feeling I had as if i had gone for a long surgery not eating for a week. As I make my way to the kitchen I opened the fridge and ate left over food and whatever I could find.

I know what some of you are thinking, yes I did do a past life regression to that specific day, not only nothing came up that same day when I fell asleep I was visited by 2 people asking me: why were you trying to find out, we told you when time is right you will remember everything. ( The thing is that I dont remember anyone telling me that in the 1st place, I imagine some info have been deleted temporary) 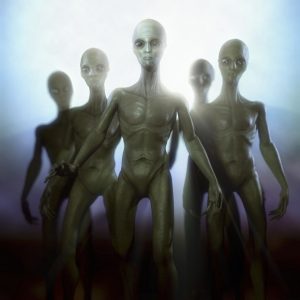