Before I get started, there are alot of BS about alien and Et worlds in general. 90% of Et’s of which I have had encounters with are kind, sweet, protective, healing beings who care for humanity. So Im here like Ive said before as the bridge between humans and the multi dimensional beings.

So having said that, lets get started. I am officially an awakened being since March 2016. Exactly 6 months into meditation every single day. One day I woke up early in the morning after I had been shown a world where ET’s live, where they are and how they live on a day to day bases. What was extremely mind boggling about my very first encounter its the fact I saw all the aliens standing up lined up on the 2 sides of a streets waiting for my arrivals. As if Im a president or someone important. Its like they already knew me and knew who I was and that I was passing by on that specific hour of the day that’s why they had already gathered in the middle of their city center. My encounter started when I found myself walking in a street which looked like somewhat with a blue haze in the air. I didnt know where I was until I looked at the people staring at me standing all so quietly.. they looked like aliens. There was a strange feeling of harmony equality understanding among them. Not one person looked over at the person next to them. Not one person pushed or shoved someone standing right next to them, everyone was all so calm and relax happily standing and watching me passing by. These beings where lined up looking like Grey but much lighter skin color with a bit of hair, they are called the white beings. They are the beings that come to earth and help open minded spiritual people in their awakening process. While walking by I passed in front of a lot of them and as I was getting closer to them they stood straight and made the “welcome home” sign with their head. I saw a beautiful woman approached me, she didn’t talk like open her mouth she just looked at me and telepathically she asked me: Hi Samantha, so when are you dying your hair back to dark color again? I looked at her in shock like how does she even know me? my hair was dark almost 10 years ago, so probably she knows me longer then I think. As these thoughts crossed my mind I replied telepathically that: your right Ive been thinking about it -soon -not now! What strikes me the most is that she went back in the line where they were all standing but she didn’t turn her back to me, she walked backwards in her spot and she smiled. I turned around looked in front of me and kept walking forward as if I knew I need to continue. 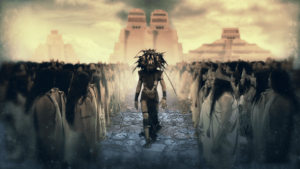 As I got to the end of the line I met with a man and a woman, again they told me telepathically that they are similar to what we would call the king and the queen, they are the leaders of their race. The man said welcome, the woman too she greeted me very so respectfully she started explaining me how their world operates, as if she was told to meet me and right away tell me everything I need to know. The man was also walking next to us but he wasn’t talking, he seemed to be a bit annoyed or maybe the fact he was told not to get involved, because she was doing all the talking. She said how there are no governments, no money or religion to control them. She was extremely calm caring respectful and she allowed me to be looking around as I was turning my heard looking into every little details to remember it afterwards, as this was a lucid dream. As we walked towards city center I realized the people had gone back to their work or something it was just us 3. She showed me their clothes, she said on special missions they wear clothes not everyday. She explained other stuff where they are in the vast universe and their distance to us on earth but unfortunately I don’t recall those details. I remember only she showing me like how to get to her like her address, but it was like star address and she was saying the position of the such and such star and I’m like wow she is so technical does she really think I know the position of the stars? We talked some more.. but I was going in and out as if their energy was so strong that would make me feel almost dizzy. I felt weak a bit.. She looked at me and she stopped walking, she didn’t say anything but all the sudden a knowing came upon me that my time was up that I had to return home. Thats where my dream ended.. but I knew I was dreaming and I was trying very hard to remember everything as I was getting ready to open my eyes. Felt strange as if I was between the 2 dimensions ours and theirs. When I opened my eyes I was feeling very sad, I almost cried. I was like what am I doing here. As if they trigged memories in my head to realize who I was living among them once before. I chose to come to earth in order to continue my expansion and of course help humanity. I know that today but had no clue last year. I now know that was the trigger that started bringing back memories specially from the past lives.