IT IS A GREAT HONOR to have been in the ship of Commander Lord Ashtar. The Ashtar Command is an group of
extraterrestrials, angels and light beings and millions of
“starships” working as coordinators of the activities of
the space fleet over the western hemisphere.
Here you might want to ask who are the Galactic Federation
of Light? The Galactic Federation of Light is a group of over 3000 star nations
who have several million ships currently surrounding planet earth. Unlike that
which humans are used to, these beings are peaceful, loving, highly intelligent.

What do our star brothers and sisters look like? The Galactic Federation of Light
have members who are of great biological and genetic diversity. Although from my personal
encounters, the ones I have met are a little bit different from us mostly because
they have bigger eyes, smaller nose and mouth. The women are very attractive and the woman who smiled and welcomed me had biggest blue eyes Ive seen, probably she was a hybrid. These beings are highly spiritually evolved. Ever since that encounter I have come to realize that a lot of Et races are actually living in their ships. Their ships are not just for travelling through stars and galaxies but also a place of residence. I absolutely have no clue why I was in their ship I know like always I was very curious I asked and I was granted the visit but what happened in there, I have a sense of missing times when I was in their ship. 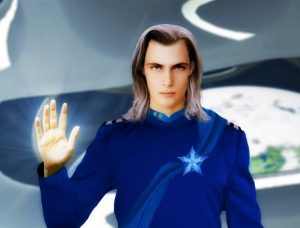